Rescue Dog Hugs News Reporter Until He Adopts Her 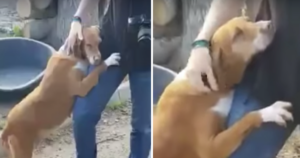 When we adopt a dog, only part of that decision is up to us. In most cases, our dogs actually choose us first. Some dogs even surprise us and make us fall in love with them when we least expect it.

That was the case for a dog at an animal shelter. She fell in love with a news reporter who was covering a story at the shelter. So, she was willing to do anything to get him to love her back. Little did that journalist know, his personal story was about to become even more famous than the one he was reporting.

Many shelter dogs watched the man out of curiosity, but one particular dog wasn’t afraid. She approached the reporter and showed him as much love as possible. The heartwarming interaction between the journalist and the dog was captured on video. It was shared all over social media, touching the hearts of people all over the world. This video is the perfect example of how dogs choose us.

In the video, the dog is hugging the reporter, refusing to let go. She clings onto his leg tightly and leans her head against him. The poor pup seems tired of being at the shelter alone, and it looks like she might have had a litter of puppies before arriving at the shelter. So, she was desperate to find someone who would truly love her.

Even though the man is likely confused by the dog’s actions, he happily encourages her behavior. He gently pets her head, causing her to cling to him more. The video is about 30 seconds long, so it’s one of the most beautiful hugs ever filmed.

As this adorable video circulated the internet, a tear-jerking story also came with it. Apparently, the news reporter adopted the dog after their famous hug took place. The dog had chosen the news reporter, and there was no way he could say no. Everyone who commented on the video agreed that adopting the dog was non-negotiable. If a dog hugs you for that long, you have no choice but to love them forever.

It’s heartwarming to see videos like this have happy endings. Clearly, the dog and the man were meant to be best friends. So, next time you’re looking to adopt a dog, be patient because the perfect dog will love you just as much as you love them. After all, the bond we share with our furry friends is unbreakable.

The post Rescue Dog Hugs News Reporter Until He Adopts Her appeared first on iHeartDogs.com.