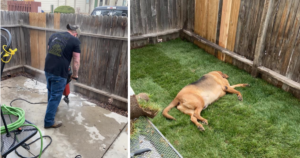 Bentley the Bloodhound had a rough start to his life. As a result, he developed trust and aggression issues, so he was labeled a “problem dog.” Bloodhounds are also large dogs, so getting a pup like this adopted proves challenging. The poor thing got returned to the shelter several times.

Fortunately, someone saw Bentley as a product of his environment and not a bad dog. KaTarra Taylor, the one who ultimately rescued him, shared Bentley’s adoption story in a post in the Facebook group Dogspotting Society.

“I took him in at 4. I was his 5th home and everyone had given up on him. He was destructive, aggressive, and untrusting. I was in a 1 bedroom apartment but I couldn’t let him go back to the rescue again after not doing well at my parents home. I worked tirelessly to leash train him, treat his anxiety, diagnose and treat his severe allergies, and break his aggression.”

Through it all, Taylor was patient with Bentley. So was her boyfriend Nick Evenson, though he claimed not to like Bentley. (Isn’t that what they all say at first?)

When it was time to give restless Bentley more space, Taylor had a tough time trying to find a rental in Colorado Springs that would allow her 120 pound Bloodhound. So that’s when she and Evenson bought a town house. The house came with a yard, but one paved with concrete, Taylor told The Dodo.

“I ended up buying a townhouse so we could stay together. It had an enclosed patio that I knew he would like. I couldn’t afford a house with a yard, but I thought I could turn the patio into a small yard with the right help.”

Taylor knew how much it would mean to Bentley, a perpetual shelter dog, to finally have actual grass to nap on. According to Taylor, his experience with grass had been limited.

Evenson helped make both of their dreams come true. He embarked on a weekend-long construction project to turn the concrete into green. (Seems like he did like the pup after all, huh?)

“I finally decided it was time to get this done last week. My boyfriend Nick was able to get it all done in one day for under $400.” After Evenson finished the construction project, the yard was now covered in grass. A dream come true for Bentley!

“Bentley immediately laid down and just stayed there for several hours. He seems so happy with it.”

After a life of kennels, sweet Bentley loves the feel of grass underneath him! He doesn’t mind the snow too much either.

Thanks to this caring couple, a dog with trust issues learned to love. Bentley is living the life he always deserved but never got the chance to! And it involves plenty of green grass.

from iHeartDogs.com https://bit.ly/37qZ2VT
via IFTTT