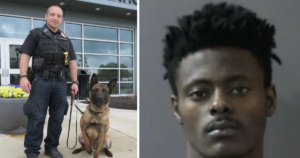 About 6 months ago, a tragic incident occurred. 5-year-old Harlej the Belgian Malinois lost his life while working for the Fishers Police Department. He chased down a suspect, who ended up killing the dog in the process. The officers were devastated, but luckily, they were able to catch the person responsible.

The police department held a beautiful memorial in Harlej’s honor. He made a brave sacrifice that day, and he will never be forgotten. Months later, Harlej finally got justice when the man responsible received his sentence for his cruel actions.

20-year-old Richard Garrett Jr. was the one who killed Harlej. Prior to the incident, he lead the police on a high-speed chase and attempted to break into two homes. Eventually, it led to the police having to chase Garrett on foot, toward a wooded area. Jarred Koopman was close behind the suspect, but he could not get him to surrender, so he sent his brave police dog to take the man down.

Harlej chased Garret deeper into the wooded area, and Koopman was confident that Harlej would be successful. But then, Garret shot the poor dog in the head as they ran further into the woods. Poor Harlej didn’t survive the gunshot wound. However, Harlej had bit Garrett’s leg in the process, so the man was unable to flee the scene.

Garrett was charged with 14 counts, including striking a law enforcement animal, resisting law enforcement, recklessness, and residential entry. He pleaded guilty for 4 of the 14 counts. He finally received his sentence approximately 7 months after Harlej’s death.

He was sentenced to 6 years at the Indiana Department of Correction. However, as part of his plea deal, the other 10 charges he had were dismissed. 6 years is not enough for the murder of a beloved dog, but at least he is getting punished for these unforgivable actions.

RELATED: K9 Harlej Has Beautiful Memorial After Losing His Life While On Duty

However, this is not the end of Garrett’s legal troubles. He will later be facing about two dozen charges related to crime spree, including a deadly shooting and a hit-and-run that killed a 65-year-old man. That case is still pending, but he will likely be faced with even more consequences in the near future.

Harlej was such a brave dog, and he was great at his job. Even though so much time has passed since his memorial, he is still in the hearts of everyone who knew him. In fact, many people have donated to K9 units and humane societies in his honor. So, he continues to make a difference in this world.