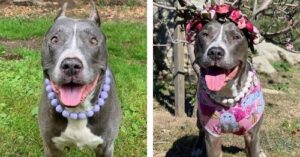 A senior Pittie named May is currently living her best life with the forever family she always deserved. Though May has an incredible support team at her side now, May had to wait until her senior years to finally find them.

May was rescued by the Frosted Faces Foundation when she was pulled from a shelter at 11 years old. May was a part of a family from the time she was a puppy to about 7 years old, when she was unfortunately re-homed due to a family member developing a dog allergy. Though this must have already been heartbreaking for May, her story was not yet over.

May was found wandering the streets just 4 years later and was brought into a local shelter. Though her original owner was contacted and saddened by the news, she was still unable to have May in her home. Thankfully for this grey-haired Pittie, Frosted Faces Foundation was ready to welcome her with open arms.

Jackie Solano, a dedicated dog-lover, came across a video of May that was circulating with the Frosted Faces Foundation. The video featured May celebrating her birthday with her previous family, side by side with a video of her sitting in the shelter a few years later.

Grieving the recent loss of her first senior rescue, Leo, she wasn’t sure if she was ready to open up her heart to another pup. Though the thought of bringing another furry friend into her home was daunting at first, she knew she could give May the senior years she deserved.

Though many people won’t adopt a Pit Bull or a senior dog, Jackie didn’t let the fact that May was both stop her.

“Bully breeds are like any other breed, they are all just dogs. Every dog should be treated as an individual and every dog deserves to experience a family and love. May has a calm and gentle nature. She loves everyone, including other animals. She just wants to be friends with everyone. We’ve met dogs who have snapped at her and she will trot off and come back later to try to make friends again.

Senior does not mean dying. I think some people assume that senior dogs will require extensive veterinary care. But puppies and younger dogs get sick too. A lot of senior dogs are healthy and active.

I realize that some people are reluctant to adopt a senior because they think their time together will be short and they don’t want to experience losing them so quickly. But the love you experience is far greater and stronger than the pain that you feel when you eventually lose them. Senior dogs will love you deeply. You may not be their first family, but you will become their only family. They will love you forever because you saved them, and they will spend the rest of their lives thanking you.”

When Jackie first brought May home, she was shut down and depressed due to her unstable life leading up to this point. Though it took some time to adjust to her new reality, May soon realized that she was finally in the care of a family that planned to keep her forever. With some patience and love, May soon became the sassy and confident girl that she is now!

“May knows what she wants, and she isn’t afraid to let you know it. I call her my vintage puppy because she loves to play with toys, run, and jump off things.”

May has brought so much happiness into Jackie’s life, and Jackie wants others to know that adopting a pup like May can do the same for them.

“We advocate for dogs like May by setting a good example. She has changed a lot of people’s perceptions, including her own family members by showing them her incredible temperament. After meeting May, people say that they had no idea that pit bulls could be so friendly or well behaved and well trained. I tell them there are tons of amazing dogs just like May waiting in shelters for their happily ever after.”

Not only was May lucky to have found such a loving home, but it was also incredible timing that she found Jackie and her family when she did. Jackie soon noticed some concerning masses popping up along May’s side, leading her to bring her into the vet for a checkup.

May soon had a surgery scheduled where the masses were promptly removed and were discovered to be cancerous mast cell tumors. Though her cancer was originally considered non-aggressive, the disease is beginning to attack her lymph nodes. She has now begun chemotherapy and will continue to fight with her family at her side every step of the way! If you’d like to keep up with her journey, you can follow May on her personal Instagram here.

The post Woman Adopts “Vintage Puppy” In Time To Join Her Fight Against Cancer appeared first on iHeartDogs.com.